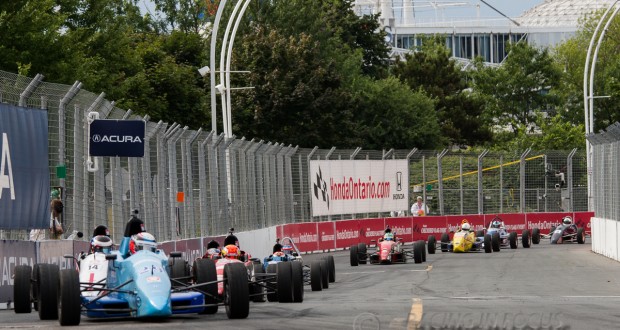 The road to auto racing success is not straight, and it is not paved with yellow bricks. Just like that pathway to the Emerald City, there are many obstacles along the way and sign posts can sometimes be deceiving. In recent years, Indy Car racing has established the Road to Indy: US F2000, Star Mazda and Indy Lights, leading to the Show: Indy Car. These development series have been taken under Indy Car’s wings and are featured support events on many Indy Car weekends. Scholarship funds have been set up to help series winners make the jump to the next level. All a young man, or woman, needs is gobs of talent and bags full of money.

Even Indy Cars best intentions are no guarantee, however. Last year’s F2000 champion, Canadian Scott Hargrove, is racing this year in the Canadian Porsche GT3 Cup series. Not a bad gig at all, but hardly on the chosen road to Indy Car fame.

Once the decision has been made to reach for the pot of gold via the Road to Indy, there is very little room for failure. A young driver must have his or her race skills in order or risk getting punted aside by the race hardened veterans already competing for those very few openings at the top level. Just when it looks like success may be at hand, Ganassi or Penske or Andretti hire a driver from Europe or South America, or one who has diving stock cars for the past 15 years. F2000 is generally not a starting point. Race craft must be attained away from the spot light where growing pains can be overcome in relative anonymity, and on a smaller budget.

No one can argue that in North America Formula 1600 is the best training ground for open wheel road racers. Created in 1967 as a driver development class, the cars are built to a very strict formula which rewards engineering ingenuity but puts the difference between winning and losing squarely in the hands of the driver. Until recently the class was known as Formula Ford, as the specified engine was the 1600 cc, 4 cylinder engine which powered so many of Ford’s production cars for years and years. About five years ago, Honda approached the Sports Car Club of America with the idea of making their 1500cc Fit motor an alternative to the ubiquitous Ford. The Fit motor is modern and relevant and Honda guaranteed that their motor would have no more performance than the Ford and that they would provide a support program. A deal was struck and the rebadged F1600 became an SCCA national class. The next year Honda’s motor was accepted in Ontario. Now most of the top F1600 contenders use Honda motors.

Many of Canada’s open wheel racing heroes raced FF. Gilles Villeneuve, Scott Goodyear, Paul Tracy and James Hinchcliffe come to mind. Ontario has traditionally boosted one of the most competitive F1600 series in the world. When Derek Daly was looking for a place for his son Conner to learn his race skills, he turned to the Ontario Formula Ford Championship and placed him under the tutelage of Brian Graham Racing. Today, Conner Daly is being touted as possibly the next American F1 driver.

F1600 isn’t just a place for young guns. It is a destination for many competitive drivers who become the measuring stick for the newbies. There is a class B (for older cars) which gives drivers an opportunity to compete for a podium spot on a much smaller budget.

Thanks largely to the efforts of Move Motorsports Management, F1600 is on a growth spurt in Ontario. Ontario and Quebec have unified their tire rules and worked together to create separate six race schedules with no conflicts. Each weekend has two points races. Four of those weekends, two in Ontario and two in Quebec, form a Super Series within a series. The 2 In TO is the fourth Ontario event and third Super Series weekend. Now the drivers don’t want to be anonymous. They want to be seen; by all their family and friends, all of Toronto, all of the racing world (and maybe Roger Penske).

Indy Car racing tends to be dominated by the three big teams: Penske, Ganassi and Andretti Racing. The circumstance in Ontario F1600 is eerily similar. The heavy hitters, all with Arrive and Drive programs are: Brian Graham Racing, Britain West Motorsport and Exclusive Autosport. With 50 foot trailers, up to a half dozen cars each and all the related trappings, these guys mean business.

New to the scene in 2014 is AVR Motorsports, co-owned by Automotive Engineering graduates Sam Ashtiani and Shane Viccary. AVR started with an Arrive and Drive program in F1200. 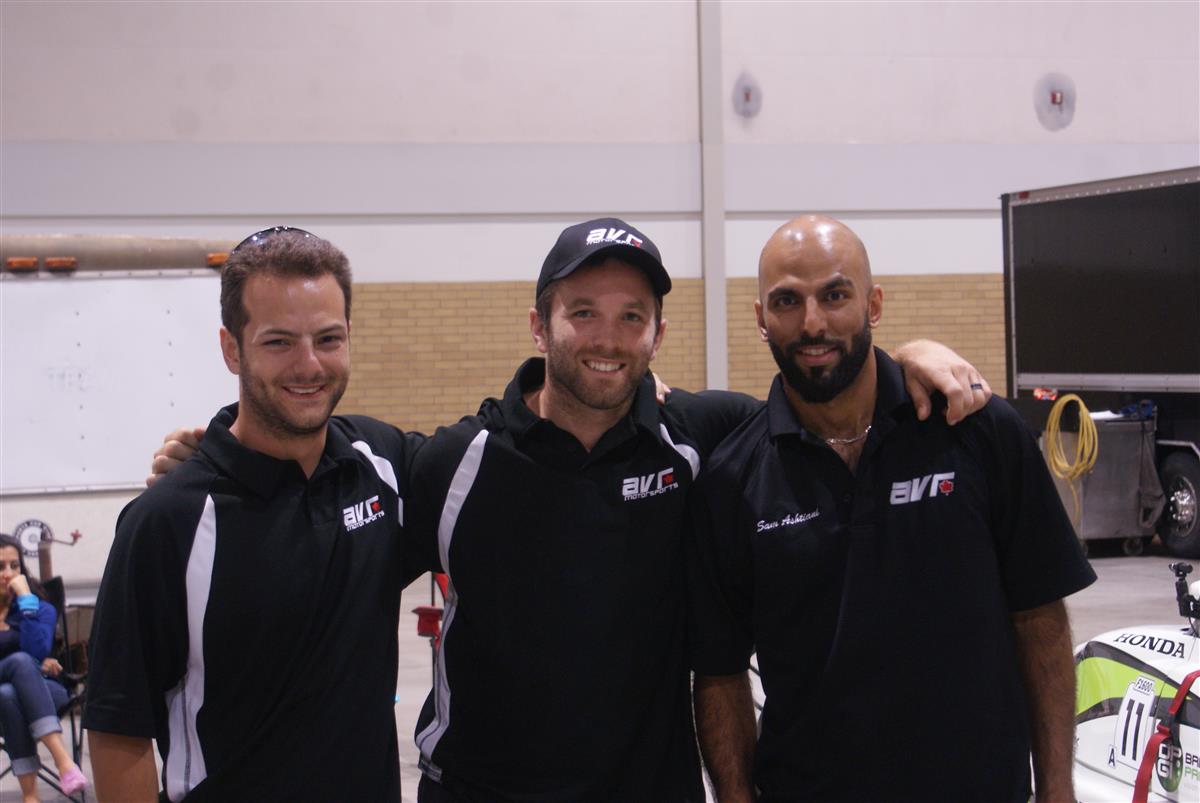 At the end of last season, two of their customers, the DuPreez family and the Arnold family, decided that they were ready to make the (considerable) jump to F1600 and that AVR would look after the cars. A deal was brokered by AVR with Brian Graham and the Arnolds and DuPreez each bought 2012 Pipers. The plan was to race at all the events in Ontario (the Arnolds subsequently decided to add the Canadian G.P. in Montreal). The Pipers are family sponsored; Reid Arnold by DPGI Print Solutions and Andre DuPreez by Horne Group. 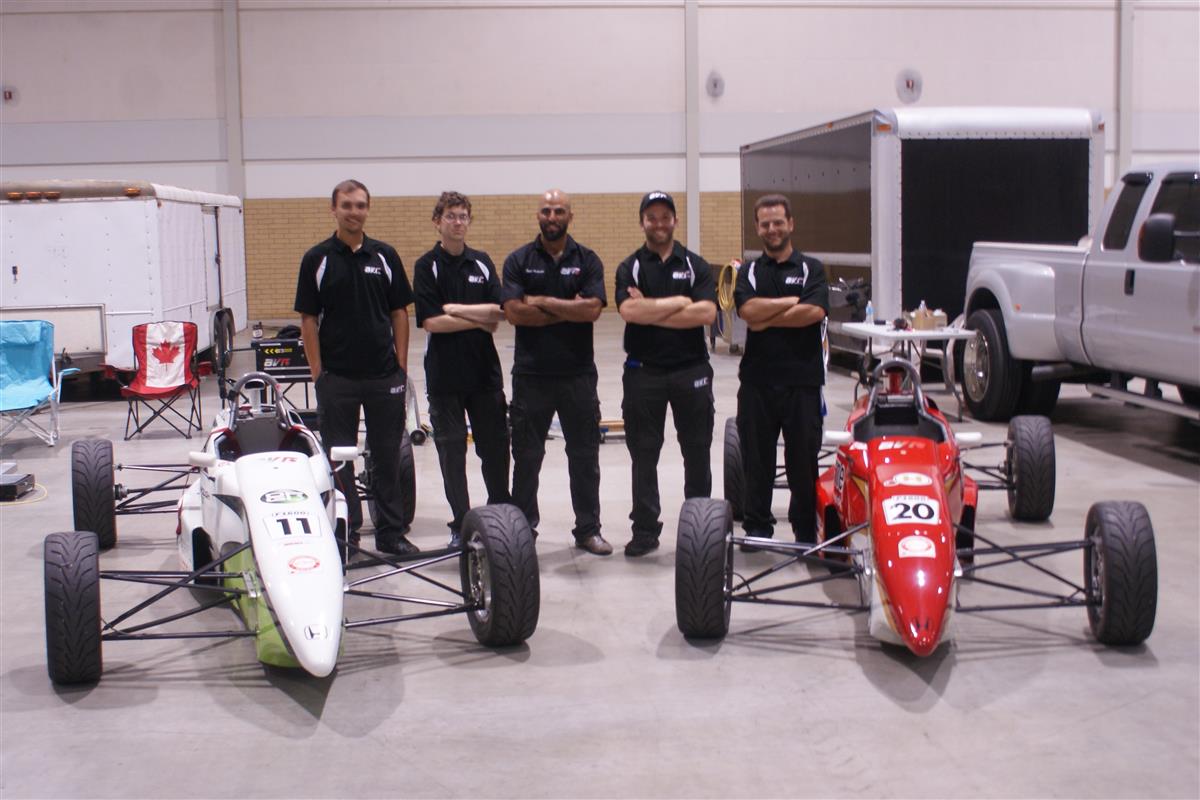 Twenty-eight cars arrived for the weekend, 20 class A and 8 class B. AVR approached the Honda Indy with cautious optimism. Those concrete walls can be very close and very unforgiving. Going into the event, Reid Arnold stood 5th in the championship, second rookie, and Andre DuPreez was 8th, 3rd rookie.

Things got off to a shaky start in the early Friday morning practice as Reid had a fairly innocent half spin going into turn one on the third lap and was collected by another car. Two broken corners and a damaged nose was the result. What seemed like an interminable wait for qualifying at 5:30 ended up being a godsend for the AVR Team. Chase Pelletier set fast time of the session in a Britain West Mygale, followed by Steve Bamford in another Mygale. Steve Bodrug was fast B car, 14th overall, in a ’93 VanDieman.

Qualifying didn’t get underway until nearly 6:00. The fast time was set by Tristan DeGrand, in an Exclusive Spectrum. Tristan, from Eureka, MO is the real deal. Coming into Toronto, he has won every race in Ontario and Quebec except one. Qualifying second was Brandon Newey, another US driver, from Carmel, IN. in a Mygale. These two would prove to be the stars of the weekend. AVR’s session went smoothly. Reid was still learning his way around and qualified 18th, 2.3 seconds from pole. It was a very tight field. Andre, ever circumspect, would line up 24th. Class B pole went to David Graham, in a ’92 VanDieman, 15th overall.

Saturday’s race, at 9:15, was dry but under threatening skies. Tristan and Brandon worked their way to the front and set about racing each other. Tristan led the last lap from Brandon. As they reached the breaking point for turn three, a right hand turn off Lakeshore Blvd., Tristan held the inside line and Brandon went to the left to try and pass on the outside. They touched and Brandon when off down the escape road. Tristan went on to win the race. Jack Mitchell Jr., 2013 series champion in a one off appearance, in another Exclusive Spectrum, ended up second. Brandon recovered to finish 15th. Conner Wagland was the winner in class B, in a ’91 VanDieman. Reid advanced to a very competitive 10th position, battling amongst the lead pack, and improved on his best time by 1.7 seconds. Andre took 2.4 seconds off his previous best time and finished 17th. With some momentum to build on, no one at AVR wanted to wait 32 plus hours for race two. In the meantime, weather played havoc with the Indy Cars on Saturday afternoon and created an interesting Sunday schedule. No matter, the F1600 race would still be at 6:15. Fortunately, the weather would turn out to be dry.

Early in race two Reid continued to battle in the lead pack and looked set to move even further forward. On lap 5, at turn three, coming off Lakeshore Blvd., where F1600 cars approach their maximum speed of 220+ kph, Reid thought he could out break the Spectrum of Max Hanratty and pass him on the outside. Unfortunately, Max braked sooner than Reid expected and Reid’s right front wheel touched the other car’s left rear. The car jumped four feet into the air and landed with enough force to break a tie rod. Reid’s day ended in the escape road at the end of Lakeshore Blvd. Starting positions for race two were determined by the fastest time in qualifying Friday or the race Saturday, so Tristan and Brandon both started at the front. They battled for the lead through two thirds of the race. They flew down Lakeshore Blvd., this time with Brandon to the inside, Tristan on the outside. They inevitably touched, this time Tristan went flying, recovering to finish 11th and Brandon went on to win over Jack Mitchell Jr. Meanwhile, back at the AVR camp, Andre continued to make progress, gaining two positons to finish 15th. In class B, everyone was thrilled to witness the victory of Amy Castell, in her family run ’90 Reynard.

Reid’ DNF hurt in more ways than one as he dropped to 7th in the overall standings, and 3rd rookie. Andre also lost a position, to 9th overall and 4th rookie. AVR and the Toyo Tires F1600 Championship’s next event is August 23 & 24 at Calabogie.