Beating Vettel ‘says a lot about me’ – Ricciardo

While the Mercedes duo tussle for title spoils, a very different battle is raging within Red Bull. 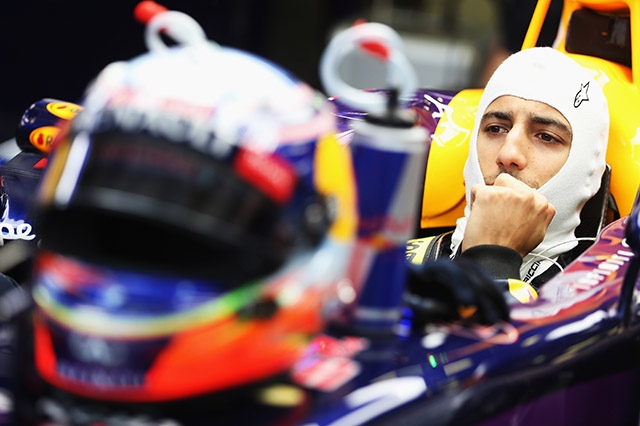 World champion for the last four seasons consecutively, Sebastian Vettel is now fighting merely to be the top dog within his own team, following the arrival of the surprisingly imposing Daniel Ricciardo.

In Canada two weeks ago, the 24-year-old Australian stepped it up yet another notch, securing his first career win, and Red Bull’s first in 2014.

“I’m learning all the time, not just from Seb but from myself.  It’s a big challenge when your teammate is a four-time world champion, so if I can beat him, it says a lot about me,” he explained.

It has been reported in recent days not only that Ricciardo has had the 2015 option in his contract already picked up by Red Bull, but that the team would also like to keep him on board for the 2016, 2017 and 2018 seasons.

Ricciardo smiled that the opening seven races of 2014 have been “just fine” for his career.

“I think even Seb enjoys it,” he said.  “For many years he had Mark (Webber) as his teammate, now it’s a new challenge.  We drive hard against each other but also with a lot of respect.

“If Red Bull wants me to stay,” said Ricciardo, “then I am more than happy to.  They’ve done so much for my career.  Hopefully I can give them a world championship.

“To do it with them, as Seb did – starting as a junior and working his way up – would be the greatest achievement.”

While some have been keen to say Ricciardo has toppled Vettel from his perch, other well-placed insiders are less sure.

Webber, Ricciardo’s countryman and predecessor, has hailed the Perth-born star’s season but he also warns that Vettel cannot be so easily written off.

“In his (Ricciardo’s) first four or five months he has done really well,” he told Fairfax Media, “but Seb has had a tough run with reliability.

“You (should) measure them across the course of a few years and see how they go, because the season has been underway for five minutes in reality.

“Daniel couldn’t have done much more though,” added Webber.

With a similar assessment of their battle so far is Dr Helmut Marko, the architect of Red Bull’s driver programme.

“They are at eye-level,” he is quoted by Speed Week.

“It’s always been the same with us — two strong drivers in the team who are treated equally.  But the current image has been distorted by technical problems that have mainly hit Sebastian.”

However, Marko also admits that Vettel has struggled with motivation in 2014.

“As a four-time world champion, you come with high expectations, so when you go to the first test and find you have no power from the engine, it’s hard to digest,” said the outspoken Austrian.

Vettel, who was told by Marko to “raise your game”, has also had to admit that his latest title defence has not been ideal.

“Many things this year are different to the past and for me unfortunately it has not been very good so far,” he said at an event in Vienna on Wednesday.  “I have had major problems with the car.

“As a driver you always want to get the best from yourself and of course also be in front of your teammate, but our real aim is to catch up to the front,” added Vettel.

At the same time, Ricciardo is riding the crest of a wave that took him to the very top of the podium in Canada.

“Taking points off Mercedes in Canada was fantastic,” said the Australian, “but realistically they are still the strongest at the moment.  We are a bit dependent on their bad luck to close the gap.

“Maybe we can be faster by the end of the season, but maybe the championship would have been decided a long way before that,” Ricciardo acknowledged.

“This year it (the title) will be difficult.  Hopefully next year we’ll be in a better position.  We’ll see how it goes,” he said.  “I’ll be ready.”