Even 2014 title may not be beyond Ricciardo

The title could be the next target for F1’s newest race winner. 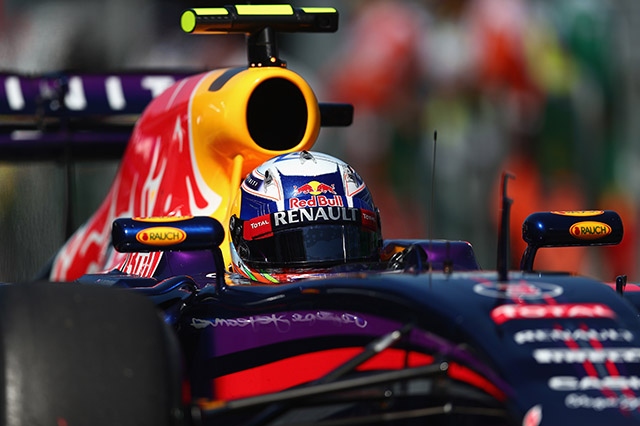 The feat earned the ringing endorsement of his predecessor and countryman, Mark Webber, who is currently preparing for the weekend’s Le Mans 24 hour race.

“He hasn’t put a wheel wrong all year so far,” Webber told NBC.

“There’s been testing regulations, wet qualifyings, all sorts of stuff thrown at him.  But for him to notch up his first win is a big step for him.”

Ricciardo, 24, is currently riding a wave of form that even his teammate, the reigning quadruple world champion Sebastian Vettel, is struggling to match.

But he might not stop at beating Vettel.  Since Bahrain in April, Ricciardo has notched up three podiums and never finished lower than fourth.

He even stood on the podium on Red Bull debut in Australia, but was disqualified amid the fuel flow saga.  He then struck more technical trouble in Malaysia.

Indeed, even amid Mercedes’ total domination in 2014, Ricciardo – the highest-placed non-Mercedes – is just 39 points behind Briton Hamilton after seven races.

“I’ve noticed that Ricciardo has been able to exploit his maximum potential almost constantly,” the Finn said in his latest interview for Hermes, “whether it’s qualifying, racing, overtaking.

“We can’t forget that his teammate is the four-time world champion, but it has been Ricciardo who has been passing the chequered flag in front,” Hakkinen said.

“I experienced it myself when I got my first victory at Jerez in 1997,” he said.  “The self confidence you get is reflected also in your performance.”

However, the blunt Marko is keen to keep Ricciardo’s feet on the ground.  He said a cursory look at the results reveals a “distorted comparison” between the always-grinning Australian and the highly successful Vettel.

“Sebastian has had bad luck with the technology,” said Marko.  “But in Malaysia he had a trouble-free race and he was coming to the finish ahead of Daniel.”

Marko said even Ricciardo’s win in Canada needs a closer look, with only “bad luck” holding back the eventually third-placed and frustrated Vettel.

“Daniel was fast the whole race,” he said, “but Vettel was not slower.”

Marko said a failed GPS system on the pitwall, and a further “miscalculation” by Red Bull regarding Vettel’s race strategy, thwarted the German’s progress.

“It definitely was not Vettel’s fault,” he said, “that Ricciardo did not stay behind him.”