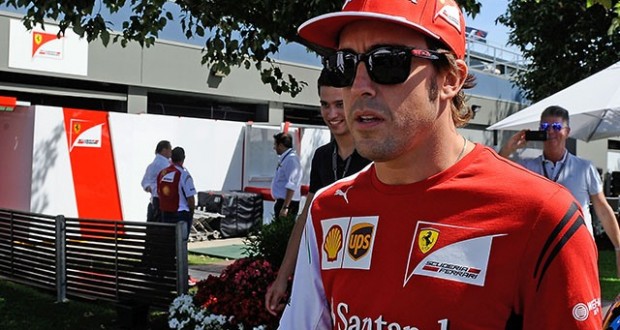 Yet another week in F1 history is passing by with little more known about the future of arguably the sport’s biggest name.

Insiders suggest Fernando Alonso is wavering between a McLaren-Honda contract on his terms or the very real prospect of a sabbatical as he waits for a seat at dominant Mercedes.

“He hasn’t got many places to go has he?” F1 supremo Bernie Ecclestone told business journalist Christian Sylt.  “There’s nowhere else other than McLaren.”

Spain’s AS newspaper claims the Spaniard has received a concrete offer from Porsche, where his friend Mark Webber already races at the fabled Le Mans 24 hours.

The Maranello team has surely signed up Sebastian Vettel to replace him, but for now, it remains unofficial.

“If you’re asking me if Vettel could be a good driver for Ferrari, the answer is yes,” newly-departed president Luca di Montezemolo said.

“He’s young, he’s a four time champion of the world, very good guy, good Ferrari client, so he has all the characteristics.  So why not?”

According to Red Bull, Vettel-to-Ferrari is a done deal.  Dr Helmut Marko says even the details of his release to Maranello have been concluded, as the German will be prevented from driving a red car in the post-season Abu Dhabi test.

“Sebastian may not drive for Ferrari in this test,” Marko confirmed to Germany’s Auto Bild.  “It is clear and we have told Sebastian.”

It is an odd situation that, now some weeks since Vettel’s next move became clear, it remains unofficial.

But the insiders are already musing Ferrari’s chances of success with its new star.

The latest rumours out of Maranello are alarming, as the well-connected Autosprint claims aerodynamic figures from the 2015 car concept are not even as good as the ones from the disappointing current car.

“They need time to rebuild everything,” F1 legend and former Ferrari driver Alain Prost told Spain’s AS, “as they have been through a lot lately and it can’t be fixed in the short term.”

The Frenchman also doubts Vettel is the silver bullet.

“Alonso has proved in the past years that a driver cannot fix things at Ferrari.  The managerial, technical and driver sides must come together.

“2015 will be difficult for Vettel,” Prost predicted, “but I think his move is positive.  When you spend so much time with a team and are a multiple champion, it is normal to lose motivation and require another challenge.

“He is young enough to have the time to build a future with Ferrari.  His position is different to Fernando, who wants to win immediately.”