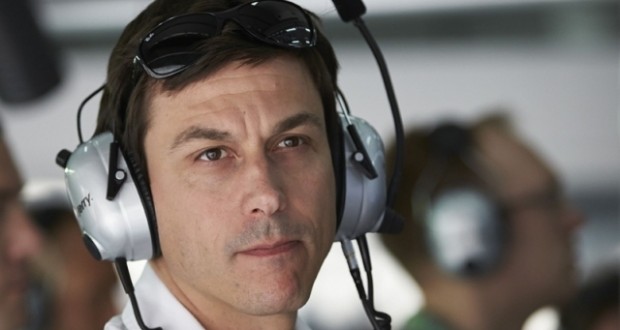 Despite having the constructors’ title already in the bag, Toto Wolff has admitted Mercedes is playing the role of “the bad guy” in F1 at present.

That is because, amid the struggles of rival engine makers Ferrari and Renault in the face of Mercedes’ utter dominance, the German marque is refusing to agree to ‘unfreeze’ aspects of the strict engine homologation rules for 2015.

It meant that Mercedes’ constructors’ title celebrations on Sunday were marred not only by the Jules Bianchi tragedy, but suggestions the team is playing a spoiler role in the political sphere.

Boss Wolff is quoted by Speed Week: “We do not want to talk about the gap to our opponents or politics today.

“But this whole discussion about the freezing of engine development and so on — it’s not quite the way it is presented.

“Already next year everyone can change about 50 per cent of the engine.  And our advantage is not only the engine, we also have a very good chassis.

“That we are suddenly the bad guys because we adhere to the rules is not pretty, but that’s the price we must pay for our success,” Wolff added.

Changing the subject, Wolff did not forget to mention the contribution that other key figures played in Mercedes’ overwhelming 2014 success — notably the retired Ross Brawn.

“Ross has been so fundamental to the team.  This is his trophy too,” he said.

All eyes will now turn to the head-to-head battle for the drivers’ crown between Lewis Hamilton and Nico Rosberg, as Daniel Ricciardo’s slim hopes for Red Bull faded even more in Russia.

With his fourth win on the trot, Hamilton extended his lead over Rosberg to 17 points with Austin, Brazil and the double points Abu Dhabi finale left to run.

“Mathematically,” former F1 driver Patrick Tambay told France’s RMC, “I think the title will not be decided until the last race.

“But sportingly and psychologically, Lewis Hamilton has the upper hand.  He is 17 points ahead, but it’s not enough yet.”

Tambay also saved a word for Williams’ Valtteri Bottas, who is causing the third-placed Ricciardo to take his focus off the leading Mercedes and begin to look in his rear mirror.

“He (Bottas) is very strong,” he said, “and always gaining momentum in the Williams team.

“He is beginning to dominate his teammate Felipe Massa — maybe he’ll even take third place in the world championship from Daniel Ricciardo,” Tambay added.