Alex Tagliani Will Start from the Inside of Row 5

Toronto, July 17, 2010 – Alex Tagliani was ninth quickest in Saturday’s qualifying for Sunday’s IndyCar Series second running of the Honda Indy Toronto. The Canadian driver was fifth fastest in the opening round of the second group to qualify and move on to the following session involving the 12 fastest of the 26-car field. In that second round, the No.77 Bowers & Wilkins Hot Wheels entry posted its best lap of the weekend lapping the 2.816-kilometer street course in 60.9996 seconds for an average speed of 166.686 km/h. Unfortunately for the FAZZT driver, his lap time was 15 hundredths of a second short of making the Firestone Fast 6. Tagliani will start the Honda Indy Toronto from the inside of row 5 in ninth spot. 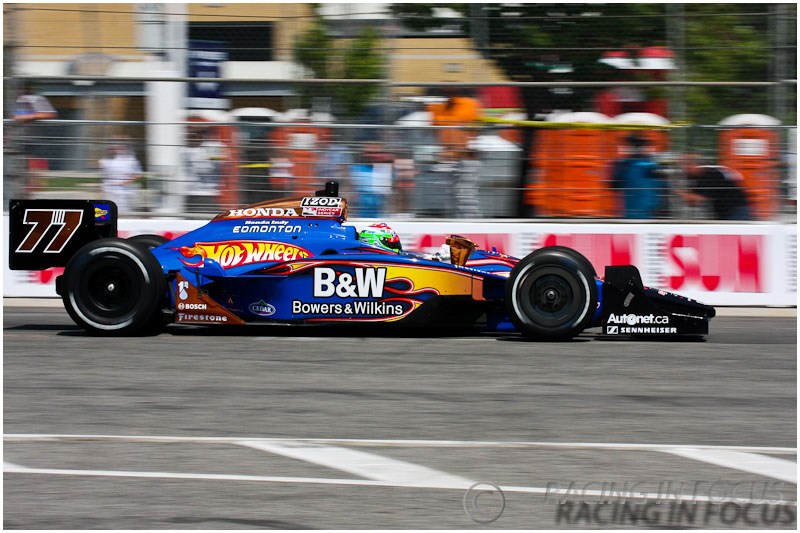 Live Timing & Scoring and Video is available at www.indycar.com

“We missed by just a little bit on set up and the car is just not quite where we wanted it to be,” Tagliani said. “We were missing some grip, and just two tenths of a second is enough to miss the Firestone Fast 6. It’s unfortunate and really disappointing. I would have loved to have crack that top 6 because we are in Canada, but I have to remember not to put so much pressure on our shoulders and just look at the bright side. We’re starting in the top-9 and up there with the best teams. So for a first year team we’re really doing well and I have a lot of faith in my Fazzt team and engineers to find something to make the car faster for the race. We’re all really looking forward to Sunday and ready to put on a show for our Canadian fans.”

Dreyer & Reinbold Racing driver Justin Wilson broke a string of nine consecutive Penske Racing drivers’ poles by winning the Honda Indy Toronto top starting position on Saturday. With a blazing record lap time of 60.2710 seconds posted in the Firestone Fast 6 qualifying session, the British driver won his first-ever IndyCar Series pole in 43 starts. The 6-foot, 3-inch tall driver edged Team Penske driver Will Power (60.4563 seconds) by a little more than 185 thousandths of a second to give his team its second IndyCar pole, its first since 2002. It is also Wilson’s second Toronto pole having earned one in Champ Car in 2006. The second row will be shared by Helio Castroneves (60.8158 s), and Ryan Hunter-Reay (60.8397 sec), and defending race winner Dario Franchitti and Scott Dixon will fill row three.

Round 10 of the 2010 IZOD IndyCar schedule is an 85-lap, 239.389-kilometer event that will be broadcasted live this Sunday, July 18 on TSN2 and ABC starting at 12:30 p.m. ET. Live Timing and Scoring as well as video coverage of Sunday’s warm-up and race are available at www.indycar.com.

Nine of the 26 drivers entered in the event have previously competed at Toronto in CART or Champ Car-sanctioned events. Paul Tracy, with two wins and pole, leads the pack with 16 starts, Alex Tagliani is second with seven, and Dario Franchitti, two poles and a win, comes in third place with six. Justin Wilson, with a pole and a win, is next with five, followed by a pair of Brazilians, Helio Castroneves, and Tony Kanaan who has a win, with four starts each. Scott Dixon, Ryan Hunter-Reay and Will Power, winner in 2007, with two starts each round up the list.