IZOD, Honda and other sponsors offer programming for all ages and all interests.

With a symbolic ringing of the bell at the Toronto Stock Exchange, festivities surrounding the Honda Indy Toronto got underway today. 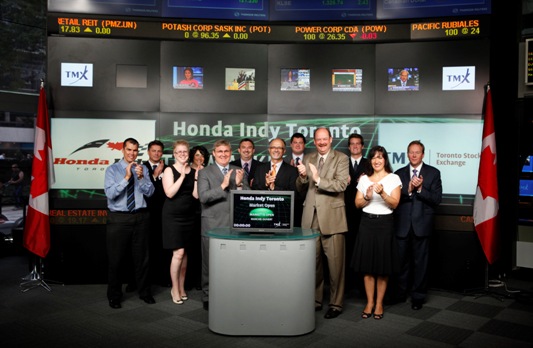 Residents and visitors to Toronto are in for a variety of activities, which kick off officially on Tuesday with Honda Indy Fest at Yonge-Dundas Square.

“This year’s edition of the Honda Indy Toronto is clearly setting a new bar in Canada in terms of on and off-track entertainment,” said Charlie Johnstone, general manager and vice president of Honda Indy Toronto. “The combination of athletes, cars, music and loads of interactive activities is second to none.”

Rallying behind Honda, IZOD and the owners of the race, a large group of key people and organizations from the private and public sector has come together to support the Honda Indy Toronto. Together, they are offering a variety of activities listed below.

Honda Canada and Paul Tracy are putting to the test the skills and agility of local media in the ultimate pit stop challenge. Up for grabs: bragging rights as the fastest tire change crew in the city. A $1,000 Donation will be made to Make-A-Wish Canada on behalf of the winning team.

Hot Wheels and the FAZZT Race Team recently introduced a customized car design that is sure to turn heads in Toronto and across Canada.

A press event to learn about the IZOD IndyCar Series, racing basics and the track. Presenters include drivers Raphael Matos and Ryan Briscoe, as well as Rocket Blanch from IRL and Eric Zeto, a Toronto native working with Ferran Dragon Racing.

Shoot For A Cure teams up with the Sam Schmidt Paralysis Foundation for the second annual Honda Indy Toronto Walk Run ‘N Wheel-a-thon in support of spinal cure research. Participants and families will have the opportunity to do a 5km run, and a 2.8km walk and wheel to the finish line on a professional racetrack.

The Honda Indy Toronto, Ontario’s largest annual sporting event, takes place from July 16 to 18 on the streets surrounding Exhibition Place near Lake Ontario and downtown Toronto.  With more than two decades of Indy car racing history in Toronto, the Honda Indy Toronto is among the most respected motorsports events in North America and features a festival-like atmosphere that includes the fastest racing series on the planet, celebrity athletes and three action-packed days of live entertainment and interactive activities. For more information and to purchase tickets visit http://www.hondaindytoronto.com/ or call 877.503.6869.