The Honda Indy Toronto will feature an important addition in 2013: a doubleheader weekend of IZOD IndyCar Series races. The addition of back-to-back races in Toronto is a first in the history of the event, which will run July 12-14 at Exhibition Place. 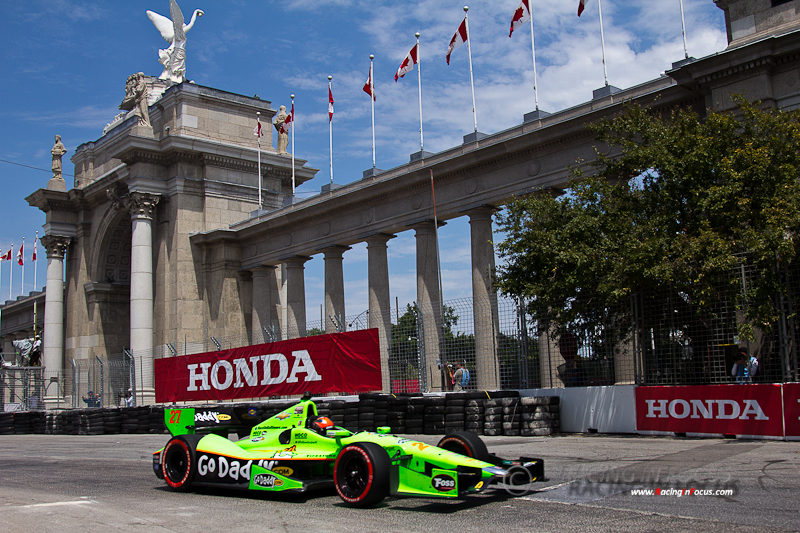 “Since we acquired the race in 2008, our mandate has been to create entertainment and excitement for fans, customers, sponsors, tourism and the local community,” said Charlie Johnstone, Vice President and General Manager of Green Savoree Toronto. “A doubleheader allows us to go further, faster in the delivery of our mission and offers numerous benefits. We’re extremely excited to make it happen.”

The Honda Indy Toronto will be one of three races, alongside Detroit and Houston, chosen to feature a doubleheader format during the 2013 IZOD IndyCar Series season. The races will run on Saturday and Sunday, and will implement standing starts exclusively at these three venues. Each race will count as its own stop on the schedule and full points will be awarded.

“The Honda Indy Toronto brings a shot of adrenaline to the city every summer,” said David Whitaker, President and CEO of Tourism Toronto. “With the event expanded to two marquee races Saturday and Sunday, visitors have even more reason to plan a weekend stay, while Toronto also benefits from the expanded broadcast and international exposure.”

“Toronto is a great venue for a doubleheader event,” said Randy Bernard, CEO of IndyCar. “Fans can always count on great on-track action, heated tempers and flag-to-flag drama when the IZOD IndyCar Series races on the streets of Toronto’s Exhibition Place. The fact we’ll get to do it twice this year will certainly entertain everyone.”

The Honda Indy Toronto is in the final stages of confirming its support series schedule for race weekend. Fans can expect the full race lineup, along with ticket renewals and sales for 2013 to be announced in the coming weeks.

About Honda Indy Toronto
The Honda Indy Toronto takes place July 12-14, 2013 on the streets surrounding Exhibition Place near Lake Ontario and downtown Toronto. With more than 25 years of IndyCar racing history in Toronto, the Honda Indy Toronto is among the most respected motorsports events in North America and includes the fastest racing series on the planet, celebrity athletes, and a festival of live entertainment and interactive activities.