With grey skies, a chill in the air and a predicted snow fall for the city of Toronto, I headed down to the Toronto Motorcycle Show in the south hall of the Metro Toronto Convention Centre. The anticipation was certainly there, but not like previous years. It seems like a malaise has befallen the once vibrant motorcycling world. With the financial meltdown, restructuring and resulting cutbacks across all sectors of the economy, worldwide, the Canadian motorcycling industry was certainly not spared in any way. But, like the promise of the next riding season, warm days and the long rides, the industry carries on in the hope and optimism for better times down the road. 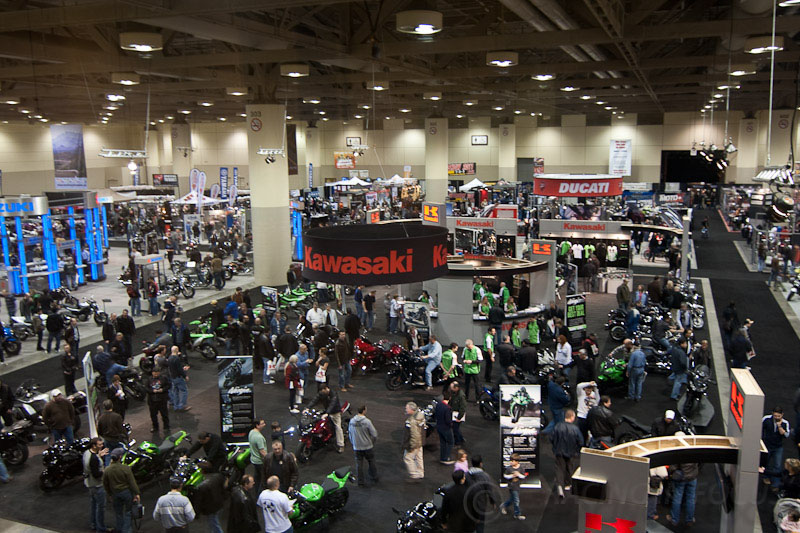 The show has all the major manufacturers represented displaying the latest in motorcycle technology and new models. There is something for everyone. The “Yamaha Riding School for Kids” where youngsters 6 to 12 learn to ride on the latest TT-R off road motorcycles to those of us who remember a simpler time when a 2 cylinder 500 or 650 cc was considered a “big bike”. 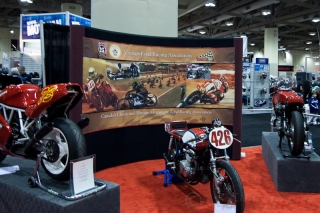 The Vintage Road Racing Association, VRRA, brings together a fine cross section of vintage racing and heritage bikes from the past. Combined with industry forums, parts, accessories, riding gear galore and a chance to hear, meet and converse with industry insiders and celebs, the time just evaporates.

A big part of the Canadian motorcycling scene is the Canadian Superbike racing series. For 2011 there will be new classes, venues and a shorter season with 6 rounds down from 7 in 2010. The 2010 season saw many changes with the loss of factory sponsorships for established teams such as Jordan Szoke’s Canadian Kawasaki championship team. It also saw the entry of BMW with their new state of the art S1000RR superbike. I spoke with Michael Ferreira, one of BMW’s top riders about the season just ended. First, a little recent history on BMW’s participation in Canadian road racing. BMW’s R1200 and HP2 have been the staple of the Canadian Thunder (Twins) series since 2005. Michael joined the team in 2007 on a R1200 finishing 6th. In 2008 and 2009 he finished a respectable 4th with the highest placing for BMW’s HP2 sport bike competing with other twins from Ducati, Buell and Yamaha. The last year for the Thunder series was 2009. When the Thunder series sputtered to a halt midway through the season, a brief experiment ensued with the HP2 competing in the Pro 600 class. “How did that turn out” I asked Ferreira? “It was a disaster”. Confirmation that mixing radically different motorcycles in one class just does not work. In 2010, Michael with fellow rider, 2 time Canadian superbike champion, Francis Martin comprised the BMW Motorrad Superbike team. BMW also partially sponsored 2 other riders, Andrew Nelson and Matt McBride. The first season results of 2nd (Nelson), 3rd (Martin), 5th (Ferreira) and 15th (McBride) out of a field of 32 was a great achievement, especially considering it was BMW’s rookie season in the top class.

Now, to the interview:

“Mosport was the last 2 rounds of the superbike series in 2010, how did you see the season, the bike and the overall experience of riding a new (unproven) bike in your rookie season”

Well, Mosport is a unique track and it caters to a lot of bikes. We figured this bike was a natural fit to this track with its speed and agility. Once I came to grips with the speed differential from other models that I have ridden there, I adapted easily to the track and to the bike. It really gelled well.

“How did you find the S1000RR compares to some of the other superbikes?”

I can’t really say as I have never raced any of the other makes, other than a couple of track days. But our bike has some advantages in that it came standard with all of the electronics, traction control, ABS and fuel management systems. I know many of the other bikes last year did not have those. It took me a while to get used to it as I never raced a 1000 before, coming from the HP2 which had 130 hp to the 1000 which has 180 hp and weighs 40 to 50 pounds less. It was a huge transition, and I took it in little baby steps. I did not want to hurt my self, get thrown off the bike. I progressed every round and got more and more comfortable with the bike and I think that’s why I had such a good season.

“How do you see the upcoming season shaping up?”

So far it looks really good. My learning curve is gone. I finished off the season battling Frank Trombino for the lead, and I actually took the lead in both of those races, but unfortunately a win was not in the cards. I made a couple of mistakes and that’s just part of the learning curve. Based on the way the season ended off I anticipate a lot more podiums next year. 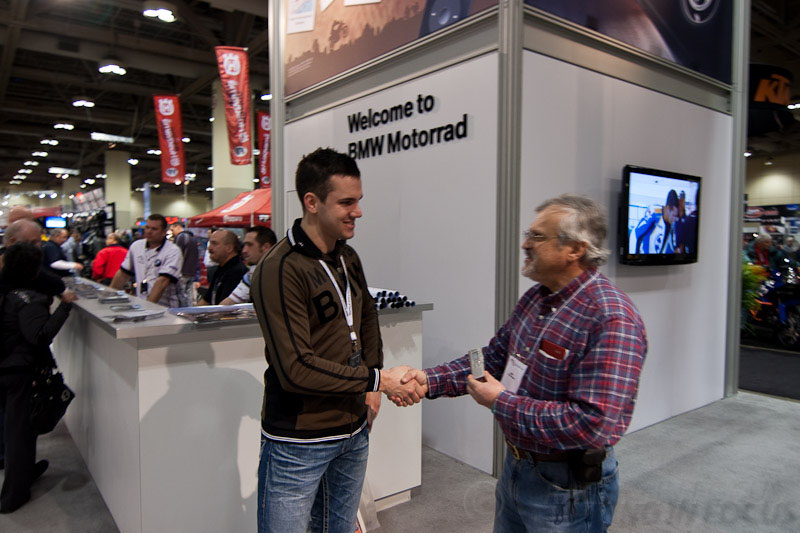 I would agree with Michael, but I think the current reigning Canadian Superbike Champion, Jordan Szoke, might have something to say about that. Szoke and his lovely wife Amy were signing autographs and chatting with visitors when I got a rare opportunity to speak with both. Amy Szoke is a really pleasant young lady, thoughtful and well spoken. Jordan, you are a lucky guy !! It is obvious that Amy and Jordan were made for each other. I asked Amy how she saw the last season, with all the turmoil of losing their main sponsor prior to the start of the 2010 season. Amy was quite candid in her reply. To say it was tough would be an understatement. They had just become husband and wife when the news hit that Kawasaki was ending their relationship with Jordan and the series. A shock not just for the Szokes, but for a lot of fans. In normal times that would not have been a major problem as Jordan was one of the most winning motorcycle racers in Canadian history, with 5 Pro Sport bike titles and 5 Superbike championships under his belt at the end of the 2009 season. A new team and sponsorship should have been a formality. But those were not normal times, several other teams and sponsors including Yamaha and Honda announced that they would not be sponsoring factory teams in 2010. On top of all that was happening, Jordan lost his father in February 2010. A difficult time indeed. But true to their winning spirit Jordan and Amy got to work, eventually landing a sponsorship with Waznie Racing and support from Honda. 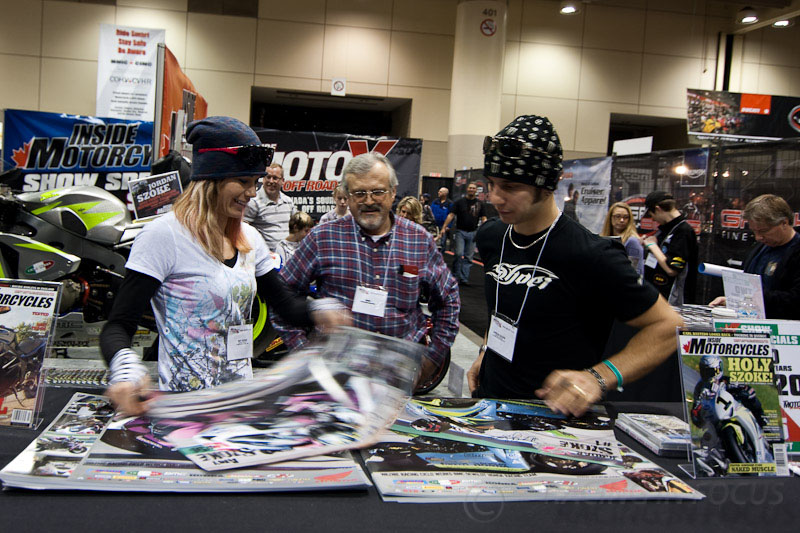 Honda lucked out, Jordan went on to win both the Pro Sportbike and Superbike titles in 2010 with a perfect record of 7 wins in Superbike and 6 of 7 in Pro Sportbike, with a 4th in round 6 at Shubenacadie. A previously unheard of accomplishment! What does the future hold for Jordan and Amy? The 2011 season, is deja-vue all over again (almost). There have been no last minute surprises like last year, but Jordan is without a contract for next year. What does a man have to do to get some respect ? It seems that Jordan and Amy are still wrestling with that question.