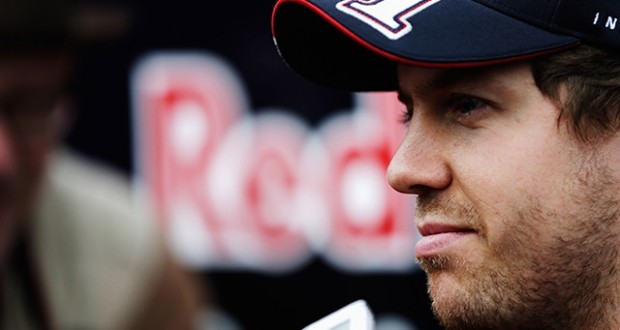 A wild rumour is now a certainty: Sebastian Vettel is leaving Red Bull to replace Fernando Alonso at Ferrari in 2015.

With a Super Typhoon already bearing down, the reigning world champion team sent gasps through the media centre on Saturday morning with its press release.

“We’re pleased to announce that Daniel (Ricciardo) will be joined in the team for 2015 by another rising star from the junior programme, Daniil Kvyat,” Red Bull said.

Vettel is obviously heading to Ferrari to replace the disgruntled Spaniard Alonso, whose impending move to McLaren-Honda is also now obvious.

“I’m not running away and it’s nothing against Red Bull,” German Vettel said on Saturday.

“There are just times in life when you need to start something new.”

He didn’t want to jump the gun on Ferrari’s official announcement, which is expected later on Saturday.

“There will be an announcement soon,” was all Vettel would say.

But Red Bull team boss Christian Horner was hiding nothing.

“Obviously Ferrari have made him a very attractive offer,” he said.

“As of January first he’ll be a competitor.  He’ll be a Ferrari driver,” said Horner.

Dr Helmut Marko, having groomed Vettel from boyhood to F1 stardom, said he has “no bad feelings” about the now 27-year-old as he decides to move on.

Vettel has consistently denied speculation surrounding his future until now, but Horner said the quadruple world champion has clearly “had a bit on his mind recently”.

Horner said Vettel had surprised the team with the news late on Friday, despite agreeing his winter test programme and 2015 merchandising plans with Red Bull only on Thursday.

Germany’s Auto Motor und Sport said Vettel has escaped from his Red Bull contract thanks to an exit clause on performance grounds.

Horner said: “If somebody’s heart is not there, it doesn’t matter what you have on a piece of paper.”

With Russian Kvyat stepping up at Red Bull’s senior team, it is expected Toro Rosso will fill the gap with Carlos Sainz jr in 2015.