Jean-Eric Vergne says he is not worried Red Bull could dump him at the end of 2014. 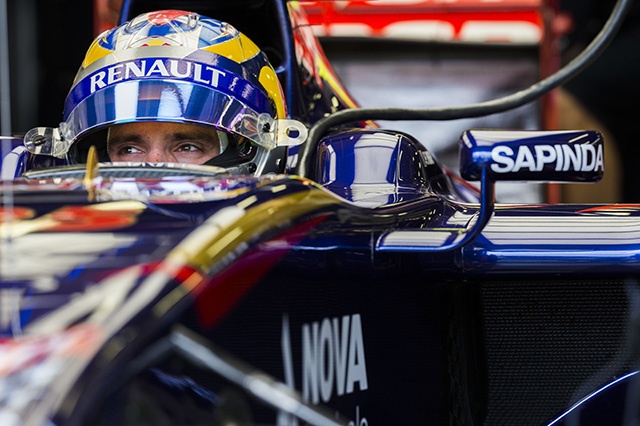 In the nine year history of the energy drink company’s second team, only two drivers have appeared in a Toro Rosso cockpit for three consecutive seasons.

They are Sebastien Buemi, the Swiss who was surprisingly dropped at the end of a solid season in 2011, and Frenchman Vergne.

So far, the signs for 24-year-old Vergne do not appear to be good.  Young rookie Daniil Kvyat has scored just as many points so far, and has stood out as perhaps a champion in the making.

Vergne, in contrast, has been almost anonymous in 2014.

Demonstrating a Red Bull F1 car at the Spa-Francorchamps round of the Formula Renault 3.5 series last weekend, the Frenchman was asked by Italiaracing if he is worried about the future.

No driver, for instance, has ever raced for Toro Rosso for four consecutive seasons.

“Well, if the situation is as you say it is, then there is little to do,” he smiled.  “I’ll go home now.

“Seriously, I do not believe that these situations can be reduced to an evaluation of statistics,” Vergne, better known in the paddock as ‘Jev’, added.

“At Red Bull and Toro Rosso, they have never been afraid of leaving aside drivers they do not believe in anymore, but if they had lost faith in me I think they would have let me go at the end of last year,” he insists.

“If they did not, and I’m still here, it is because they believe in me and my abilities.”

Vergne does not agree with the assessment that he has been outshone this year by the vastly less experienced Kvyat, who leapt straight into F1 as GP3 champion.

“As I have said, my integration with the technical staff of the team has developed significantly,” he said, “and the results show that it is bearing fruit — something that the team takes fully into account.

“As for me, I feel at home, as if the team is my family, so I don’t think they have the intention to pull apart a package that works,” said Vergne.