Alex Tagliani Is Sixth Quickest in Friday’s Practice in Toronto

Toronto, July 16, 2010 – FAZZT Race Team driver Alex Tagliani was sixth fastest in Friday’s practice for Sunday’s Honda Indy Toronto. Tagliani posted his fastest lap time on his final run around the 2.816-kilometer street course with a time 1 minute 02.3935 seconds for an average speed of 162.968 km/h. That lap time at the end of the session propelled the Bowers & Wilkins Hot Wheels driver from 11th on the time sheet to fourth. However, Will Power (Team Penske) and Raphael Matos (de Ferran Dragon Racing), still on track when Tagliani got the checkered flag, bested his time on their final lap to respectively take fourth and fifth place ahead of Tagliani. Overall, it is still a very good day for the FAZZT Race Team who are only 24 hundredths of a second from the top spot. 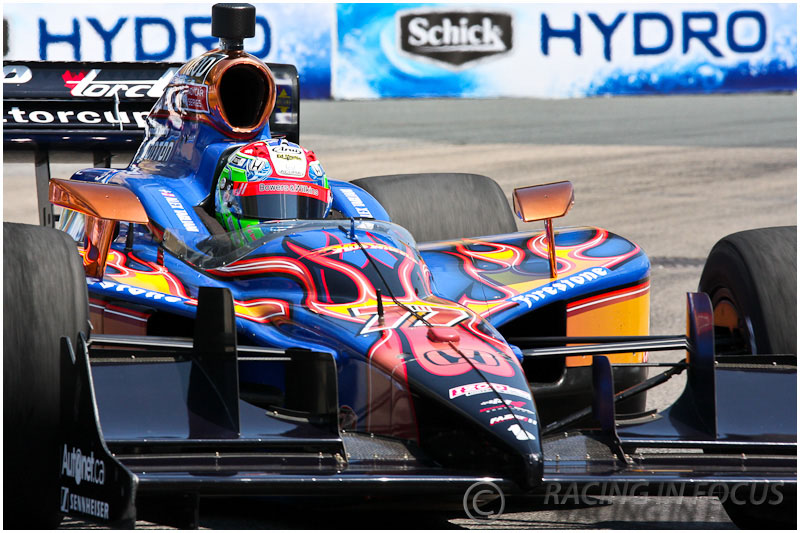 Live Timing & Scoring and Video is available at www.indycar.com

The top 13 drivers were within a second of the time set by Hunter-Reay during Friday’s second session. In the morning opening practice, Tagliani was third quickest behind leader Scott Dixon and Justin Wilson. Tagliani is making his tenth start in America’s top open wheel series races held in Toronto since 2000, having run in both Champ Car and IndyCar over the course of the last 10 years. He has qualified four times in the top 5 in Toronto with a best 4th place on the grid in 2003.

“It was actually a pretty good day for the FAZZT team here in Toronto,” Tagliani said. “The Bower & Wilkins Hot Wheels car rolled off the transporter competitive in the first practice but we decided to try a completely different set up for the afternoon practice. The car was definitely better but I didn’t get a real good lap in. We ran consistently in the top-five in both practices and that is where we want to be but there are still lots of work to do and speed to find. I expect the qualifying speeds to be faster than what we’ve see in practice so far, but I feel pretty confident that I have a good car and that we can improve. I’m pretty motivated based on my performance from last year here in the Honda Indy and the fact that, even if we are a new team, that we’ve shown some pretty good result this year so far and that has raised our expectations. We just have to focus and work hard and the results will come. Hopefully sooner than later and maybe even on home soil.”

Qualifying for the Honda Indy Toronto will start at 12:50 p.m. ET on Saturday afternoon. The fastest six drivers following the first segment of qualifying will move to the Firestone Fast 6 shootout session for pole position. Round 10 of the 2010 IZOD IndyCar schedule is an 85-lap, 239.389-kilometer event that will be broadcasted live this Sunday, July 18 on TSN2 and ABC starting at 12:30 p.m. ET. Live Timing and Scoring as well as video coverage of Saturday practice, and qualifying sessions, and Sunday’s race are available at www.indycar.com.

Four drivers, still active in the current IndyCar Series lineup, have won in Toronto in the CART/Champ Car era. Toronto’s own Paul Tracy is a two-time winner as is Dario Franchitti. Tracy won in 1993 as a member of Penske Racing and in 2003 in the last season of Player’s/Forsythe Racing operations. Tracy had also won in TO in 1990 in the Indy Lights Series. As for Franchitti, he won both in CART and IndyCar. His first win came in 1999 as a teammate of Tracy at Team Green and his second Toronto victory happened last year when the IRL brought open wheel racing back to Toronto.

Will Power, the series current overall point leader, won in 2007 with Walker Racing and Justin Wilson was a Toronto winner in 2005 with RuSPORT. The king of Toronto remains Michael Andretti, now Andretti Autosport Team Principal, who won seven times during his CART/Champ Car career. During his Champ Car & IndyCar career, Tagliani has two-podium finish in Toronto with a second place in 2001 and a third in 2005.