The owner/driver of the No. 20 Fuzzy’s Vodka/Ed Carpenter Racing Chevrolet was the final qualifier May 18 and recorded a four-lap average of 231.067 mph to bump James Hinchcliffe from the top spot and claim the $100,000 Verizon P1 Award for the 98th Running of the Indianapolis 500.
Carpenter is the 11th driver to earn back-to-back poles for the Indianapolis 500 — the most recent Helio Castroneves in 2009-10. Carpenter’s four-lap average was the fastest since 2003, when Castroneves won the pole (231.725 mph) and was the race runner-up. Carpenter earned the Verizon P1 Award last May with a four-lap average speed of 228.762 mph.
“It’s awesome to do this two years in a row; I was surprised last year and didn’t expect to do it this year with such deep competition. It’s exciting, but after going through this last year and not winning the race I’ve been so much more determined,” said Carpenter, who led 37 laps but finished 10th. “Now it’s all about the race, and we want to close the deal.”

The Fast Nine Shootout closed two intriguing days of qualifications under a new format that set the field May 17 and determined starting positions May 18.
Juan Pablo Montoya recorded a four-lap average of 231.007 mph average in the No. 2 Verizon Team Penske car to lead the qualifiers for positions 10-33. He’ll be on Row 4 with reigning Verizon IndyCar Series champion and 2008 Indy 500 winner Scott Dixon (230.928 mph average) in the No. 9 Target Chip Ganassi Racing car and first-year competitor Kurt Busch (230.027) in the No. 26 Suretone car for Andretti Autosport.
Six of those 24 qualifiers registered four-lap averages above 230 mph, and all but four bettered their average speed from Round 1. Row 11 features the youngest – 19-year-old Sage Karam – and oldest – 46-year-old Buddy Lazier – alongside Sebastian Saavedra, who will be 24 on June 2.
The difference in time between Carpenter and Lazier (2.1509 seconds) is the closest field by time in the history of the Indianapolis 500. The previous closest was 2.5399 seconds in 2011. The difference in speed between Carpenter and Lazier (3.147 mph) is the second-closest field by speed in the history of the race. The closest was 3.130 mph in 1953. 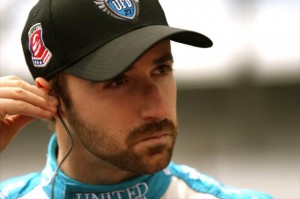 Hinchcliffe, who eight days earlier suffered a concussion in the Grand Prix of Indianapolis and was cleared to drive May 15, registered a fast lap of 231.618 mph on his first lap in the session and averaged 230.839 mph in the No. 27 United Fiber & Data car. Will Power (230.697 average) will start on the outside of Row 1 — his second front-row start.

Castroneves, seeking his fourth Indy 500 victory, recorded the fastest qualifying lap of the two days (231.671) in the Fast Nine Shootout in the No. 3 Pennzoil Ultra Platinum Team Penske car. Simon Pagenaud (230.614) and Marco Andretti (230.544), who qualified third last year, will join Castroneves on Row 2.
Carlos Munoz, who started and finished second last year as a rookie, qualified on the inside of Row 3 (230.146) in the No. 34 Cinsay AndrettiTV.com HVM car. Josef Newgarden, in his third season with Sarah Fisher Hartman Racing, qualified eighth (229.893) and JR Hildebrand (228.726), the 2011 race runner-up as a rookie and the first qualifier in this session, qualified ninth.

ED CARPENTER ( No. 20 Fuzzy’s Vodka/Ed Carpenter Racing Chevrolet): “It’s exciting. But after going through this last year and not winning the race I’ve been so much more determined. I think the whole team has to really figure out what we need to do next Sunday and that remains true. It’s awesome to win another pole and I guess I’m one of 10 guys to win back to back, which is pretty cool.” (On qualifying weather conditions) “It was hard. The conditions changed a lot. It’s a beautiful day but the track temp is probably as high as we’ve seen since Sunday, last week. So that made for a challenge for everyone because no one was as trimmed out last Sunday. So, I think you saw a lot of guys with more inconsistent runs than what we were seeing on track yesterday and I think, in part, that’s due to temperatures. Everyone’s going for it. It’s fast nine so guys are laying it all out there. My team did a great job preparing the car and they gave me just the right level of downforce just like they did last year. I must have some smart guys working behind me.”

JAMES HINCHCLIFFE (No. 27 United Fiber & Data Honda): “It’s tough to be upset. We knew Ed (Carpenter) was going to be tough to beat anyway, and it wasn’t until the first three laps that I’d run that I thought, ‘Well, maybe we do have a shot at this!’ The car was a huge handful, but it needed to be-it was fast. That’s not a criticism of the car at all. Going into Turn 3 on that last lap, I was working on the tools like crazy and the thing stepped out a bit on entry. I had to take some wheel out of it, creating understeer on exit and I had to crack the throttle. I don’t think anybody’s ever been on pole at the Indianapolis Motor Speedway cracking the throttle over four laps, so I kind of knew right then and there. I was screaming in my helmet. At the same time, if the worst we’re going to start is second, then that’s awesome. Huge credit to Andretti Autosport and United Fiber & Data.  I’m so happy to be on the front row again, just so disappointed we missed it again, but it is what it is. Congrats again to Ed.” (On being in the hospital last week to being on front row this week) “I’ll get over this real quick because in the grand scheme of things, this has still been an awesome day; it’s been an awesome couple of days since being cleared to drive. I’m just so thankful that it all worked out. Big thanks to the team for all the work they did over the week; I really had very little to do with this. It kind of sucks that we’re the highest car on the team, because all these guys did all the work over the week, so huge thanks to Ryan (Hunter-Reay), Marco (Andretti), Carlos (Munoz), E.J. (Viso) and Kurt (Busch).  We’ll see what we’ve got next Sunday.”

WILL POWER (No. 12 Verizon Team Penske Chevrolet): “It was a solid run. It’s just the speed wasn’t there. It was nerve racking having to come back today and pretty trimmed out and haul it wide open for four laps again and it was harder. So it was harder. I think a few guys had lifts. Hinch had lift and Helio had lift. We were all on the edge. It’s great, man. It is really, truly great. The only thing that sucks about a front row start and not getting pole is that you have got to be here at 7 a.m. for a photo. I thought it was going to be the one day I’d get to sleep in.”

HELIO CASTRONEVES (No. 3 Pennzoil Ultra Platinum Team Penske): “The car wasn’t as good as yesterday like we thought it would be – we have a few small issues we’ll go back and figure out. Anyways, we were aggressive and you have to go for it. Now we’ll focus on the race, see where we can do better in traffic. With the conditions changing from this morning, it’s hotter now… it definitely affects your run. We’re starting from the third row, so we’ll see what happens in the race.”

SIMON PAGENAUD (No. 77 Schmidt Peterson Hamilton Racing Honda): “It’s Indianapolis, so it’s the most nerve-wracking  place for the entire Indy Car season. I’m almost shaking. I think all of us are shaking. Nobody can say they’re comfortable during qualifying. We’re running as littler wing as we can, as little grip as we can to be fast on the straights, and it’s ‘hang on’ in the corners. It’s enjoyable, and it’s a challenge. It’s nerve-wracking, but enjoyable. I had great fun. It doesn’t matter where we wind up, I’m just very happy, and we’ll go race very hard.”

MARCO ANDRETTI (No. 25 Snapple Honda): “I was just trying to give feedback to my teammates to see if they could do any better. That felt like the Indy 500 right there. It seemed like that run in the Snapple car was never-ending; we were hanging on for sure.”

CARLOS MUNOZ (No. 34 Cinsay AndrettiTV.com HVM Honda): “The car wasn’t as good as yesterday like we thought it would be – we have a few small issues we’ll go back and figure out. Anyways, we were aggressive and you have to go for it. Now we’ll focus on the race, see where we can do better in traffic. With the conditions changing from this morning, it’s hotter now. It definitely affects your run. We’re starting from the third row, so we’ll see what happens in the race.”

JOSEF NEWGARDEN (No. 67 Hartman Oil/Sarah Fisher Hartman Racing Honda): “It was difficult today. It was a little warmer. We went down swinging today – that’s for sure. We tried as much as we could and probably went a little too far. But, you know what? I would rather try too much than to try too little. We put it out there today. It wasn’t enough. Now, we will focus on the race.”

JR HILDEBRAND (No. 21 Preferred Freezer/Ed Carpenter Racing Chevrolet): “I’m super disappointed. I think maybe just in some of the adjustments for the conditions something just ended up being amiss. There was plenty of speed in the car, but the balance was way off. We’ll have to go back and just figure out what happened. We’re locked in the Top 9. I’m glad we her able to accomplish that. It’s really unfortunate when we know we’ve got the speed to not be able to lay it all out there.”