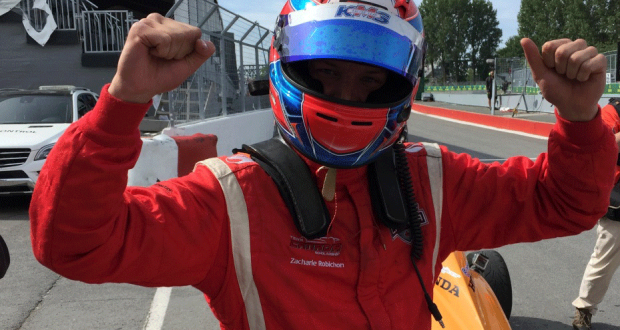 The grid was determined by fastest laps set in Race 1 and Didier Schraenen earned the prime pole position. Alongside was Olivier Bedard who had a tremendous start and edged ahead slightly just past the start finish line. Schraenen and Bedard touched, spinning Bedard into the end of pit wall and Schraenen sent hard into the outside wall, damaging both cars and also collecting Michel Bonnet. Michel was able to continue.

The field scrambled to avoid Bedard parked on the track with several big names dropping down the order. The biggest loser in the melee was Lazare who fell back to 8th. There were many beneficiaries of the mayhem as well, like Mikhail Goikhberg who moved from 11th to 6th.

Dussault assumed the lead coming out of corner 2 with Adams and Robichon in pursuit. The safety car was deployed by the time the field reached the hairpin as corner workers and safety crew tended to Schraenen who was still in his car.

It would take another 10 minutes for Schraenen to be extricated. He was awake, alert and helped to the ambulance by safety workers but was under his own power. He would be transported to hospital to be looked over but does not appear to have any injuries.

At the restart Dussault maintained the lead and Robichon pounced quickly on Adams, grabbing 2nd. An intense battle for 3rd ensued between Adams, the charging Lazare, JP Jodoin and Reid Arnold, allowing the top 2 to gap the field slightly.

The battle for the lead intensified with several moves per lap being made by both Dussault and Robichon resulting in light contact. Robichon would get around once, feeling the pressure of the checkered flag nearing only to be re-passed to the delight of the crowd.

Lazare moved around Adams for 3rd and Reid Arnold then joining in and passing Adams to take 4th.

Disaster then struck for Jodoin with the car losing power, forcing him to slow and lose all the positions he had worked so hard for. Bruce Kitchen then had an engine issue and was forced to park at the side of the track. His parked car was struck by rookie Ben Hurst who had stormed through the field into 10th position from his 17th starting spot, ending his day.

That set the stage for a monumental last lap between the leaders. Robichon was all over the back of Dussault, ready to pounce. It would take until the last corner of the last lap as Robichon out braked Dussault, both cars absolutely on the limit. Robichon was by but had trouble getting off the final corner and the two touched once more.

At the line it was a jubilant Robichon taking the victory ahead of Dussault. Jesse Lazare would grab the final step on the podium and Michael Adams slipped under Reid Arnold in the last corner to take 4th. Arnold did earn fastest lap of the race honours.

Jacques Villeneuve proved once more why he is a motorsport legend, taking the win in Formula Tour Master’s Class and finishing an impressive 9th overall.

Zacharie Robichon – “I was lucky to get through the start. Someone touched me and knocked the alignment out slightly but the car still felt okay. I could see Adams and Dussault were sliding a lot and making little mistakes and I could stay with them so I figured I am going for it because I drove through the field to 3rd at Toronto Indy last year with the steering off. I got by Adams right after the restart and wanted to put pressure on Dussault right away. He made some really tricky moves that were a little risky – you could tell he has been racing in the UK and is very quick. As we headed into the hairpin Brian (Graham) came on the radio and said we were coming to the checkered so I had only one chance. As we entered the braking zone for the last corner I went in really deep. I’m not even sure I would have made the exit of the corner if that new strip of material on the track hadn’t held me. I slowed so much Dussault got into the back of me because he got a better run. In the end if he hadn’t I may not have won, he may have out-dragged me down the straight. It was a great battle and I am so happy for the team as well as myself.”

Patrick Dussault – “That was a typical British racing move Zach made on me at the end there. He definitely knows how to race and I hate to lose but let’s be honest, I came here as the new guy and with only driving the car in two sessions in the dry, winning the first race and having a shot at the win this one right up until the last lap. It was a great experience, the car and team were great and to be able to race in front of so many friends, family and my local sponsors was amazing. I am happy and know I did a good job.”

Jesse Lazare – “The start of the race was crazy. I tried to go to the inside to avoid the spinning cars but Bedard was parked there and I had to slow to avoid him and fell all the way back to 8th. After the restart I just focused on getting them one by one making my way back to the front. Maybe if there were a few more laps of green it would be different but I love coming back to the F1600 series and it’s great racing.”

The next round of the Formula 1600 Super Series is the Bay of Quinte Grand Prix, July 18, 19 at Shannonville Motorsport Park. 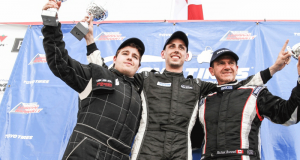 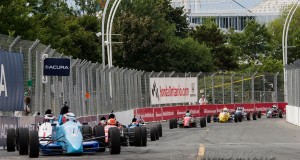 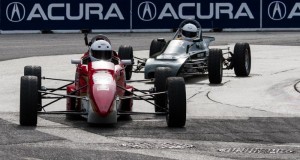