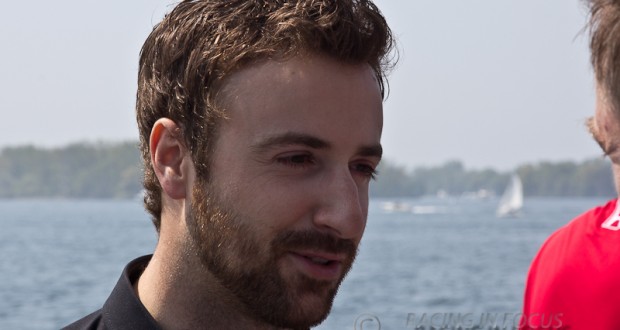 James Hinchcliffe has a new home in the Verizon IndyCar Series.

The three-time Verizon IndyCar Series race winner has signed a multi-year contract with Schmidt Peterson Motorsports to drive the team’s No. 77 entry, beginning with the 2015 race season.

“Despite being around in Indy Lights for years, SPM is a relatively young team in the IndyCar paddock,” Hinchcliffe said. “To see what they have accomplished in the last few seasons has been incredible. Winning races, being competitive at all tracks and finishing in the top five in the championship against more experienced teams at this level is impressive. Because they are young, there is still room for them to grow and improve, and that’s an exciting thought for me.”

Hinchcliffe, 27, will join Schmidt Peterson Motorsports immediately for offseason testing. He replaces Simon Pagenaud, who announced he would be moving to Team Penske last month. It will be Hinchcliffe’s second stint at SPM, which has finished fifth or better in the series championship for the past three years with Pagenaud.

In 2009, Hinchcliffe drove for SPM in Indy Lights, finishing fifth in the championship. He entered the Verizon IndyCar Series in 2011, earning Rookie of the Year honors. Hinchcliffe finished eighth in points in 2012 and 2013, and his three wins came in 2013 on street courses at St. Petersburg and Sao Paulo, Brazil, as well as on the short oval at Iowa Speedway.

“James had great success in Indy Lights and other series on his way to IndyCar,” team co-owner Sam Schmidt said. “In fact, he would already be with us driving the No. 77 if he would have been available three years ago. We went after him in 2011, but it didn’t work out then.

“We know that his success in the Verizon IndyCar Series is no fluke. We’ve now won races and contended for championships, and we believe he’s going to be the person we need to keep moving forward as a team. It’s a very big compliment to the team that James wants to come drive for us and that he thinks that he can win and contend for championships with us.”

SPM has laid out clear goals for its future in the Verizon IndyCar Series, with Hinchcliffe at the center of execution, according to team co-owner Ric Peterson.

“When Sam, Rob Edwards (SPM general manager) and I discussed who was going to drive our No. 77 car, it was always focused on who could help us achieve our two main goals over the next three years – winning the championship and the Indianapolis 500,” Peterson said. “James’ three victories in 2013 and his two career front row starts at the Indy 500 were evidence that he had the potential to help us realize those goals. I am also very proud to welcome a fellow Canadian to our team.”